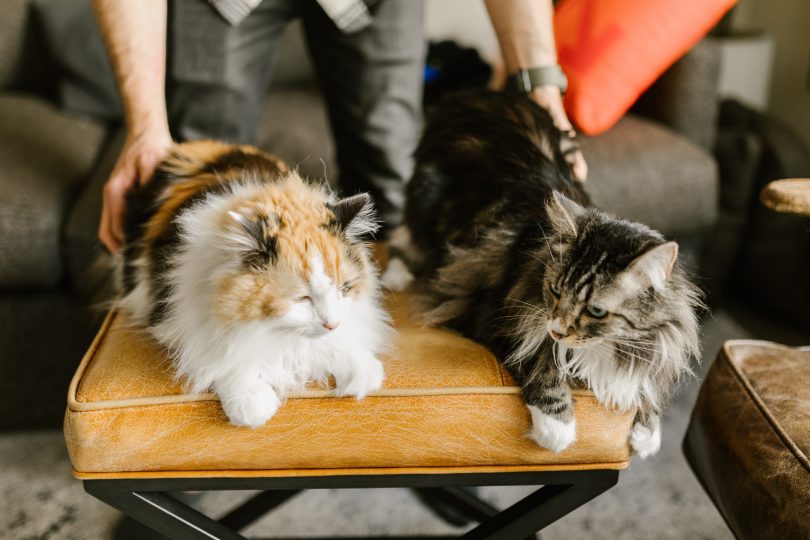 I am sure that there are many of us that stare at our furry cats and wonder what it is that they are thinking when they look at us. I would bet that many of them believe that we look odd when compared to them. Cats are not easy to understand most of the time. Many times when you think you know what they want, they nip at you to tell you that you were most definitely wrong.

What does it mean when a cat stares at us? What are they thinking? The funny part is that many of us humans just want to know what is going through the head of a cat. One thing I can guarantee about cats, in general, is that they are mysterious creatures. They seem to have an attitude of ‘I do not care. Rightfully so, especially when you think of humans today.

Many humans are so busy sticking their noses into other people’s business that we do not have the time to be so nonchalant, such as a cat. The domesticated cat spends most of its time sleeping. They wake up to eat, do what they need to do, and if the desire hits them, they may even socialize with a human once in a while. They may try and get the human to play with them.

When a cat looks at us, many researchers believe that the cat believes that we are cats also. Larger, definitely clumsy, but still cats. This actually makes a lot of sense, if you think about it. Most cats treat humans in the same fashion as they do other cats or other animals. For instance, I can watch my cat walking up to the family dog and rub along the dog’s legs. Then immediately after, come to a human and do the same behaviour.

There are a few behaviours that cats will show when it comes to a human that they do not show to other cats or other animals. For example, when they are hungry, the cat has a way of letting a human know that it needs food right now.

You will also very seldom see a cat act like it is expecting another animal to hold it. The cat certainly will not jump into an animal’s lap.

Researchers also let it be known that there has been nothing shown that cats hold humans in a different regard than other animals. Their behaviours are virtually the same when dealing with other cats compared to a human.

You will find many times that your feline is actually acting the same way with you while laying in your lap, as it does laying next to another feline.

Kneading: Kneading is when the cat paws the human next to him. Many humans call this making muffin, I prefer to think of it as a relaxation technique. I know it sounds odd, but my family cat seems to know when I am secretly stressed. She does seem to ‘knead’ the dog’s paw when the dog is stressed during a storm.

Cats also like to groom themselves A LOT! I have found that when I have been doing yard work, cleaning the house or something similar that has left a different scent on my hands, the cat will begin to lick my skin as if to clean it.

An easier way to think of a cat and its behaviour towards humans is that they seem to look at us as though we are their Cat Mom. The behaviours they show are simply actions made in love. The kneading kitten will do this when they are nursing from their mothers as kittens. Grooming is an attempt to rid us of the dirty or smelly stuff they may sense on our skin.

Now, it does not seem like a cat is looking at us as though we are terrible. Cats do not trip over other cats, however, humans may easily trip over a cat. So seeing a human as clumsy is definitely there. We are large and clumsy in their eyes.

The majority of understanding your cat is to realize that the cat will give the same reaction it gives to other cats, plus more when you are the one feeding the cat, giving the cat water, taking care of and nurturing the cat. The way your cat responds to you as you do these things is the same response that has been given to the cat that raised the kitten.

So what is the difference? There is nothing to show that a cat sees us any differently than it would another cat.  In other words, they know we are different, but that does not seem to matter to the cat. What they want is the nurturing, the bond, the food and water, the playtime and cleaning up after your cat. In return, your cat may bring you a fresh bird or mouse that it has killed, as a gift. They will knead any part of you that they are touching, in the same manner, they did when they were kittens. They have since realized they will not receive milk by doing this action with us, it is still a comforting action both to them and to us as humans

In a 2005 research study done at Dallas and Pennsylvania Universities, it was determined that a cat can not really decipher the human face. They were only able to pick out the human face they knew roughly half the time when tested. Yet, when the cat was shown an image of a cat it was familiar with, and a completely different cat that it had never seen before, the cat was able to pick the image of a familiar cat 90 per cent of the time.

To explain it in simpler, more scientific terms, cats do not rely on facial recognition when it comes to humans. They rely on scent, the way we feel, and the sound of our voices in order to identify those that they love of the human species. Personal opinion, our family cat, seems to determine on different measures also. There are family members that have been around the cat since we adopted him, not daily, but enough where the cat should know.

For some odd reason, our cat would prefer to hiss and run away from many of our family members. I believe that this is simply due to the animal being able to sense how a person feels and thinks about the cat. I am likely not correct about this, but, in my opinion, this is a territorial claim that the cat is attempting to make. Such as an attempt to decide who the cat chooses to allow around him, and who he does not want near him. Is the scent of the person something that resonates in a negative fashion with the cat? I can’t answer that. I do not believe there were any negative experiences.

Simply, it is the same with a cat as many other animals, they seem to sense who they can trust, who loves them back the way we love them. Our looks do not matter to them, they likely see us as big blobs or huge fuzzy shadows.

Cat needs to rely on their other senses in order to protect themselves, just as humans do. We, as humans, have ways of determining who is a good person and who we should stay away from. All this would definitively explain why there is usually a look of love coming from our cats. They know who is there to nurture them, to care for them and for that feeling, they will reciprocate in kind.

Humans need to be more like a cat ultimately. Be you, do not continuously worry about how others see you. And in return, we need to stop being so judgemental about looks. The feline species have that superior air about them at all times. It is not that it is an Air that they put out, it is simply an acceptance that what they see is not judged by appearance, but rather by how they are treated. They, in turn, return the same feelings, the same attempt at nurturing.

Is it possible that cats are actually smarter than many human beings in the world? Or is it that they were never taught that they should judge someone by how they look?

The facts remain, that the cat is a mysterious creature that we may never fully understand. This may very well be a lesson for humankind to see others the way our cats see us. They know they are going to receive love and nurturing from certain individuals, and this knowledge in a cat is not based on how I look, how you look or how they mean person down the block looks.

It is more based on what they sense from people.