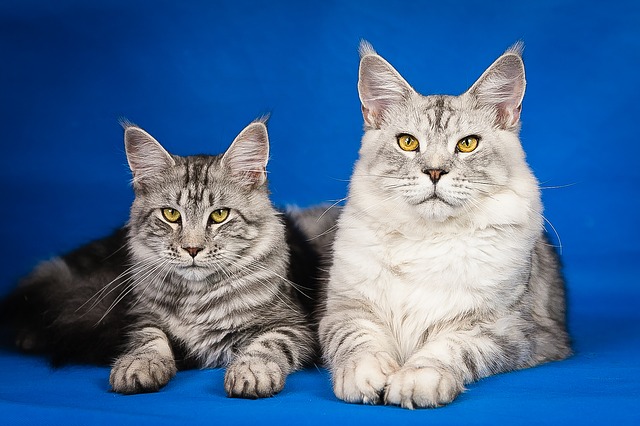 We know the different breeds of cats by their genetics. The genetics tell a story of who the cat is, what they may be like, what they look like, and even what type of temperament that the cat has. Genetics are what make up the cat breed.

Known to be a very big cat, there is no way that we can determine if one Maine Coon will be on the larger end or the smaller side. This would all depend on the genetics of the two parent cats.  The dominant traits determine the offspring. The Maine Coon could, however, end up with two recessive markers which would make it a smaller sized Maine Coon.

At the same time, the Maine Coon could end up with two dominant markers or genes, this could make the offspring larger than that of the parents.

There are many cat breeds that only have one or two colors. The Maine Coon could have many. And of varied patterns. There are seven patterns known for the Maine Coon breed.

Along with the patterns will come colors. The Maine Coon is known to have three main colors.

However, do not start thinking there are only three options. When the colors combine with the patterns, there are around 75 different looks that a Maine Coon could have. The coloring is inherited from the parents, certain colors will only come to be if both parents have that color. For instance, the reddish color is a sex linked color gene. The only way a Maine Coon will inherit the reddish gene is if the same sex parent has the color.

Whereas, with the black coloring, only one parent needs to have that in order for a kitten to have a chance at retaining the black coloring in its coat. The same can be said about the white coloring. The tortoiseshell coloring is passed from the mother to the female offspring.

Genetics are also responsible for the eye color of a Maine Coon. However, this is not obvious by looking at the eyes. While both parents may have Golden colored eyes, the offspring may have a different color. The color will depend on the amount of melanin that is in the iris of the cat.

The catch here is that a kitten is born with very little melanin. As they grow, the melanin will also increase. As the melanin increases, the Maine Coon may end up with a Copper color, Green color or Golden color, or possibly any number of hues that could come from a combination of colors.

The Maine Coon is not predisposed to any Genetic Eye Problems, or more so than any other breed. Just as with humans, the Maine Coon, as well as all other breeds, could be born being farsighted or nearsighted, these cases are rare.

The Maine Coon was bred where it is cold, it is believed that larger paws helped them to navigate through snow and slush better. It was a common trait at one time for the Maine Coon to be born with extra toes on one or more of their paws. The larger feet were also covered with the fur and had tufts on the underside which kept the paws well insulated.

Although Polydactyl is a dominant trait in Maine Coons, the breeders have managed to eliminate the majority of Polydactyl paws.

The Maine Coon is an actual descendant of the Norwegian Forest Cat, along with a mysterious and supposedly extinct breed.  One hilarious theory surmises that the Maine coon came about because one of its parents mated with a raccoon. This is how the got the coloring and pattern. We will put an end to that theory immediately. It is genetically impossible for a cat to breed with a raccoon.

Due to genetics, the Maine Coon cat is regularly listed in the World Records. Another genetic secret is that the Maine Coon is a fierce hunter. Even though they have not been hunting before breeding, this is a gene that they can not shut down. It is an instinct to be a hunter. It is believed that the Maine Coon originally sailed on the ships with the Vikings.

They could be called continent hoppers, Each stop they would jump off ship and go hunting for smaller critters such as rodents. This also means, by the way, that the Maine Coon in essence protected the Vikings. There are many diseases that can be spread by rodents of all types. When they kept the cats on the ship there was less chance that the seaman or pirates or Vikings would become infected with one of those dreaded diseases.

Your Maine Coon will continue to have the instinct to hunt, even as an indoor cat. By making them an area that gives them plenty of room to run and jump and wear off some built up energy, your Maine Coon will burn off the need to prowl for pests. They also love to play with toys, if you can find the sort they like. Such as stuffed mice, or some type of toy mouse that scoots across the floor that your Maine Coon can chase.

This will also help them with that instinct for hunting that they have. There are many breeds, not just the Maine Coon cats, who love to chase toys, even laser lights are exciting for them. In time, you may begin to believe that you hear your Maine Coon asking to play with certain toys. Listen up! These giant furballs love to talk to you.

They may even follow you all around the home just to spend time with you. These cats are known as the Gentle Giants of the feline world. They get along with all humans who show interest. They do not like to be startled, however, so it is wise to not sneak up on your Maine Coon when it is sleeping.

Our final thoughts on the genetics of a Maine Coon cat are simple. When you come to expect the unexpected, you will be pleasantly surprised by the breed. They are a fun loving, giant breed. They love to talk, chatter and even sing; more than they purr like a cat. They make great companions and are extremely loving.

When seen by a veterinarian on a routine basis, many, if not all issues can be treated or prevented by the veterinarian. It is not just a Maine Coon that is predisposed to the aforementioned diseases, all breeds are susceptible to diseases or illnesses. The Maine Coon can live a long and satisfying life when routinely seen by the veterinarian and taken care of properly.