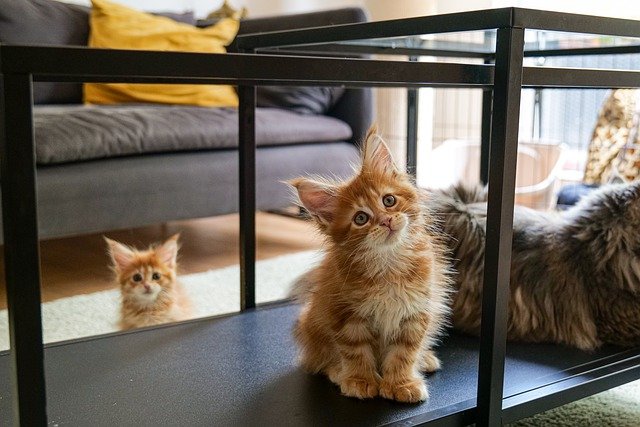 These strange throaty noises excite cats when they see potential prey they can’t catch. Not all cats do this, but some can be observed. This has only been found to affect animals that do not go outside. The most plausible theory explains that it is the predator’s way of purring, by which the cat shows that it is ready to hunt but cannot reach its prey. It’s something out of frustration. Cats usually don’t make any sounds before attacking so as not to frighten their prey.

Another possible explanation is that the cat is showing in this way how excited it is to see a bird and is trying to warn its owner. Perhaps it simulates hunting and crushing its prey. It is least likely that the cat is attracted to the prey by these strange sounds.’

Sometimes cats make a screeching, cooing sound, almost like a bird. It differs from meowing in both sound and meaning. We refer to the high-pitched, squawking sound made by cats as a greeting to humans or other cats. It is associated with a positive and friendly environment. Cats chirp to get the attention of kittens or people, and it is a way of saying, “Hey, look at me.”

Commonly, a cat’s purr is equated with a feeling of contentment. However, the significance of this feline sound, according to Sharon Crowell-Davis – a professor of veterinary behaviour at the University of Georgia – is far more significant. Purring can be a form of expressing pain, which is observed especially in parturient cats. The sound raises the level of endorphins in the body, as a result of which mood improves, and pain is alleviated.

In addition, when the sound frequency is 25-150 Hz, wound healing is accelerated, and bone density improves. Purring can be a manifestation of a request for help, a way of demanding to pet or informing your pets of your friendly intentions. It is also emitted in stressful situations and when the animal wants something. The vibrations during purring allow cat moms to communicate with kittens who are still deaf and blind. With the help of this sound, the animals inform the mother of their needs, recognize her and locate her. Baby kittens usually start purring 2 days after birth.

The sounds made by the cat range from a sleepy and gentle purr to rough murmurs with pulsations. So far, researchers have not developed a single consensus theory to explain the origin of this characteristic purr. According to one, the purr is produced by the vibration of the false vocal cords located at the vocal ligaments. At the same time, according to another, it is triggered by post-phase contractions of the laryngeal and abdominal diaphragm muscles.

Cat noises – what does meowing and whining mean?

The sound of a cat meowing can express a variety of states. The animal makes them when it is happy, nervous, demands food, and welcomes the caregiver. Cats, meowing, want to attract attention – the sound is an attempt to arouse interest and contact with humans.

The shrill sound can be caused by health problems, especially those typical of old age: disorders of natural behaviour, perception, and disorientation. Quite often, the animal also meows for no reason. Young cats, meowing, call their mother, while for adults, it can be a way to scare off an opponent.

The least favourite sound of the cat by its owners is wailing. It takes the form of sing-songy, crying, long, high-pitched sounds. These are the characteristic sounds of a cat in heat, that is, during the breeding season. The so-called nocturnal cat vocalizations are the most notable. Such vocalizations are quite often accompanied by marking the area with urine. The animal may also wail during intense play. Shrill prolonged meowing, even howling, is typical of sick cats during puberty and old age.

Barking is perhaps the strangest cat sounds caregivers hear and probably the least understood. Some people call it jawing or snapping, and furries often make it when sitting on a windowsill, gazing through the glass at the birds hovering outside the window.

The barking is produced when our purring friend moves its jaws rhythmically and quickly. And indeed, it is somewhat reminiscent of a dog barking but can also be associated with the chattering of teeth.

This surprising feline sound is interpreted as an expression of excitement, triggered by the sight of potential prey – our charges are eager to hunt birds. At the same time, it can be considered a sign of frustration, as the potential prey is out of the furry’s reach.

Behaviourists consider this barking as a so-called intentional movement. This is the term used to describe animal behaviour that externalizes its intentions. In the case in question, it is the desire to capture and kill a bird. Cats kill their prey with a quick and powerful bite on the neck, interrupting the spinal cord at the cervical region. Seeing potential prey but unable to reach it, the cat makes a killing motion as if it imagined doing so.

Barking in our pets, however, occurs in other situations. For example, when the pet sees us putting food on our plate and wants us to share it with him. Sometimes we can hear this feline sound when our charge is angry.

A chirp occurs in similar situations to barking. That is when the pet is watching for inaccessible prey. Our purring pets also chirp when something intriguing appears in their sight. These may be objects or noises that the pet somehow associates with prey or eating or food. This cat sound thus has a similar meaning to barking.

A cat’s chirping sound is somewhat reminiscent of birdsong or the squeaks of rodents – hence its name. I have encountered the statement that this cat sound imitates the sounds made by rodents and birds. Of course, there is no question of conscious imitation.

What other noises do cats make? A vocal way of cat communication is also hissing. This sound is made when the animals want to express displeasure and scare off an intruder. When the animal does not have the desired result, and the opponent does not retreat, it usually proceeds to attack.

For what reason do cats make bird-snorting sounds?

One might guess that a cat’s chirping means something positive. Some mutts make such noises, usually when the owner comes home or when he pulls out a bag of treats. These are undoubtedly happy moments for the animal.

These peculiar noises are high-pitched, chirp-like sounds made by cats to greet humans or other purrs. They are associated with a positive, friendly atmosphere, says Dr Sasha Gibbons of Just Cats Veterinary Hospital in Stamford, Connecticut.

According to The Humane Society of the United States, cat chirps are how a mother calls her kittens to get their attention. Analogously, mutts refer to us. A cat will chirp to get attention… “After all, I want to be petted for a minimum of twenty minutes, not some measly five, trrrri, triiiiy. I sit here and purr all the time, don’t you see, triiii, tri.” Cats want to make their presence known, which is why they make these peculiar high-pitched sounds. The same goes for eating: “Man, pay attention to me and put my bowl first, tri trri trrriy, my brother will wait, he is more patient!”.

Chirping instead of meowing?

What is the difference between a cat’s chirping and a classic meow? Why wouldn’t cats just meow to get attention or to say hello? It turns out that purrs meow when they crave attentiveness – but the kind of attention they need can also be negative.

Why do some cats chirp and others don’t?

You may never have heard a cat’s treble if you have a quieter, less sociable cat that avoids too much attention. On the other hand, if your purr is a bit younger and loves to be the centre of attention, you may receive constant singing concerts (in your own home and for free).