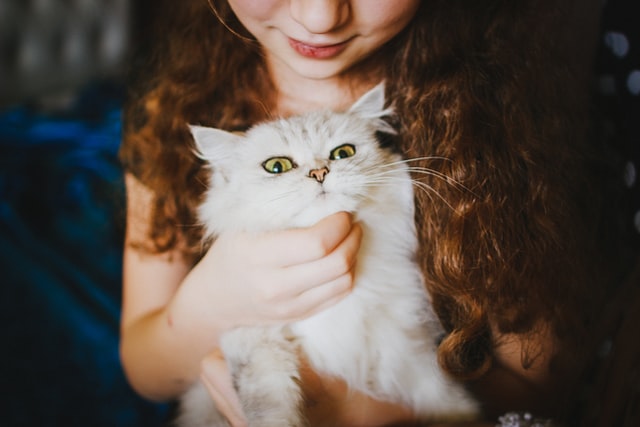 Leonardo de Vinci once said, “Even the meanest cat is an Amaze masterpiece of nature.” Is that why the cat holds such a special place in our home?

Your relationship with your cat is unique. However, even to you, a cat does not reveal all its secrets. To explore and discover  the benefits of owning a cat, the WALTHAM® Pet Nutrition Center has conducted scientific research on the benefits of positive caregiver-pet relationships. In the presence of a cat, we feel calm and affectionate. Its playful and cheeky nature, its ability to observe calmly, and its gentle and soothing purr are also not insignificant…

Having fun with a cat has tangible benefits. Felinotherapy (from Latin: Felis – cat, therapeia – care, treatment) is the method of zootherapy, which comprises frequent contact with these furries. Felinotherapy is usually applied to people with disabilities (including physically and mentally disabled children) and seniors and the infirm. The therapy involves holding the cat, feeding it, stroking it, grooming it, and playing with it. Just watching the cat can have a therapeutic effect.

Feline therapy facilitates interpersonal communication and helps people to open up and get rid of inhibitions. However, you can also gain a lot from being with a cat without participating in therapy. Great news for cat owners. There are health benefits to having this pet in your home. Check out the benefits of owning a cat, below are 7 Amazing Mental Health Benefits of Having Cats.

1. A positive mood and a better attitude to life

A purring cat has a soothing effect on us. It allows us to relax and unwind. It puts us in a blissful mood. Thanks to this, the amount of stress hormones in our body decreases, while the production of serotonin, the so-called happiness hormone, increases. And all this translates into better health!

It has been scientifically proven that having a cat has a good effect on our psyche and even helps us get rid of depression, anxiety and recover faster from harsh experiences. Stroking a cat and playing with it is also very good for us. To sum up: if you want to have a happy life, take in a cat. In contact with a furry one, processes take place in us which positively influence our health, well-being and psyche.

Studies also noted that communing with cats reduces cholesterol levels in the blood. People who have constant contact with cats live under the same roof as them, decreasing the probability of heart attack or other atherosclerotic diseases by a few percentage points. So we are dealing with emotional as well as biological impacts.

2. Cats have magical powers for our hearts

It might surprise some people, but owning a cat has been scientifically proven to benefit the heart, reducing the risk of stroke or heart attack by as much as 20 per cent. Scientists from Edinburgh discovered that people who have a cat at home are better protected against cardiovascular disease than those who do not keep pets. What’s more – it turns out that cats protect us more effectively against heart diseases than dogs.

With four-leggeds, the risk of the appearance of dangerous diseases decreases by 10 per cent. Research has shown that having a cat can decrease stress levels, which will also have a reducing effect on the risk of cardiovascular disease. Owning a cat can reduce the risk of various heart problems, including stroke, by about 30 per cent.

At the American Stroke Association conference held in New Orleans, it was announced that owning a cat reduces the risk of heart attack – by nearly a third, according to American scientists.

3. Thanks to our furry friends we live longer

Researchers from Edinburgh have come to this conclusion. According to the study, the researchers found that people who take care of cats lead longer lives than those who do not surround themselves with pets. In part, this has to do with cat purring – the scientists proved that acoustic vibrations of a specific frequency help lower high blood pressure, as well as improve blood circulation in the brain, have a beneficial effect on the nervous system, and stabilize heart rhythm.

According to the research, the owners of furries live on average 4-5 years longer.

Cats can also reduce allergies in humans, although it is widely believed that cats can only aggravate them. Early exposure to the allergen in cat saliva (because we are not sensitized by cat hair, but by all secretions, including saliva that spreads on hair), causes the body to become immune. Allergic reactions from animal contact occur in children in the early preschool years, ages three to five.

Therefore, if the child has contact with the cat earlier, the body often becomes immune, has enough exposure to the allergen that by the time the child enters the age when the allergy could appear, the body is so accustomed that the allergy does not appear.

In adults, it varies. Some cats sensitize us more, others less.My uncle for example, was allergic all his life. He couldn’t have any pets at home. When we had our first cat, he magically got over it. We now have four cats and my husband doesn’t have an allergic reaction to any of them. I suspect it is a matter of adaptation.

5. Greater intelligence from the cats…

Yes, The British researchers came to an interesting conclusion when they looked at cat and dog owners. A whole three thousand households were put under the magnifying glass. What was the result? It turns out that cat owners are smarter than dog owners.

American scientists from Wisconsin agree with this. But this relationship also works the other way – a study conducted in Great Britain showed that people with higher education are more likely to decide to adopt a cat.

Observing a cat can teach us a lot. The nature and behaviour of these pets are largely based on the concept of mindfulness, which translates as “mindfulness,” “full presence,” or “attentive presence.” The cat doesn’t rush. It is patient, attentive and focused on a particular moment. He finds time to rest and to play.

It does not eat in a hurry. All this can be a valuable lesson for you, especially if you live a fast-paced, busy life and don’t have time for everything. Besides, your house cat spends most of the day relaxing – why don’t you follow his example and find time to relax every day?

Fun fact: Purring helps heal bones, tendons and muscles! The sound of a cat purring is one of the softest sounds in the world, and while it certainly means your cat is happy and well, the sound has also long been associated with its healing ability for human bones and muscles.

Purring cats produce vibrations between 20 and 140 Hz. Studies have shown that frequencies in the 18-35 Hz range have a positive effect on joint mobility after injury. This has led scientists to talk about how the sound that cats emit can help humans.

The cat may help with some conditions and infirmities. For decades, the ability of cats to draw out pain has been known – the pet can intuitively sense the painful area; it lies down near it, which has the effect of relieving the pain.

It is negative ions in the cat’s fur (painful places are positively ionized, so after contact with negative ions, they are neutralized). Being in a cat’s company also lowers the cholesterol level, helps to cope with insomnia, is beneficial in case of flatulence, flu or stomach ulcers.

What do cats teach us?

Cats are teaching us healthy discipline and what is important:

The cats calm us down and restructure our mood, making us more cheerful, distant and happy. Like animals, they influence the development of empathy – a tool for communicating with a healthy attitude. Burping, purring removes any blockages in the human body, affecting the efficient flow of energy.

Besides many advantages of owning a cat (as a cat would say – it is quite the opposite, they own us!), we should remember that it is an immense responsibility. Finally, I want to emphasize something important: Our beloved pets love us deeply; they are attached to us and miss us, if u give them the same feelings as they do for us