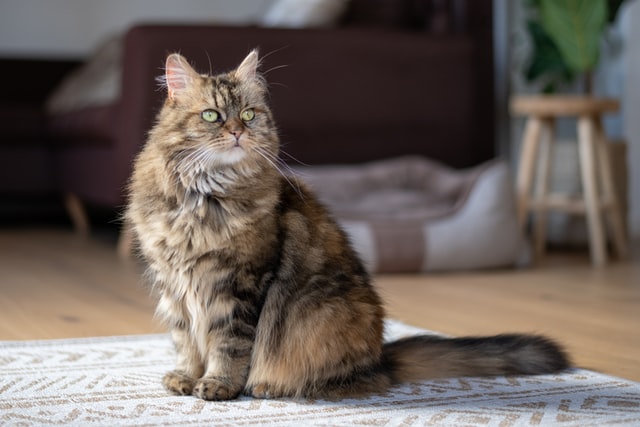 You are sure that you are ready to increase your family by getting another pet. However, you are curious as to if your Maine Coon cat will be good with a dog in the home. There is good news there, your Maine Coon has a great disposition in regards to other animals.

You can count on your Maine Coon to remain the laid-back and gentle cat he or she is. They are not known to be highly territorial, most of the time. This does not mean that you can just suddenly bring home a dog and expect perfect camaraderie.

That may sound odd to say when it comes to two different animals. In reality, our pets are not much different than we are as humans. When it comes to new people, we expect introductions, even if we do it ourselves. It is simply a matter of respect and courtesy. Your Maine Coon feels no different.

When introducing, start slow. If at all possible make it a visit with the new dog you will be bringing home. Give the two a short bout of time together and see what happens. After the first time, your Maine Coon will likely remember the dog and not be so skittish. When possible, put them in adjoining areas. This will allow them to smell each other and even eye the other up to gauge what they can.

When it is time to put the two in the same room, do not force the issue. Be in the room and sit down. It may help if you are holding your Maine Coon when the dog enters the room. By doing this, your Maine Coon will know that you will not dump him or her off your lap for the new dog.

The two in close proximity, with you in the center will enable them to smell each other, and test the waters, so to speak. When they see that you are paying attention to both of them, it may ease up any jealousy streak.

At the same time, let me reiterate that the time you spend with your Maine Coon should not be changed. The Maine Coon will still expect the routine to stay the same. You will need to incorporate time into life to spend with the new dog and then both of the pets together.

A Maine Coon is commonly known as the gentle giant, the dog of the cat breed. Technically any animals will get along with each other. Some take longer and others build a relationship immediately . Your Maine Coon is such an easy going cat that they seem to shrug off about anything. The Maine Coon is adept at winning the hearts of all who cross their path.

Of course, it also helps that the Maine Coon doesn’t like confrontation, and will seemingly avoid it. That is, unless for some reason, the Maine Coon feels a threat from the dog. A Maine Coon cat is a playful cat and dogs love to play.

It may only be a short amount of time before you see the two playing, even rough housing. Stay back, they are just playing. Let them have their fun. When it is time, they will stop. Otherwise, you just need to think of it as exercise.

Again, it would not be the right thing to do as far as putting the new dog into a closed room with your Maine Coon cat. It takes time to get to know one another, just as with humans. If either one acts standoffish it is because they just want to know who it is they are dealing with. There are steps to take to make this initial introductory period as smooth as possible for both your Maine Coon and the new dog.

You already know that your Maine Coon cat is a smart cookie.  The Maine Coon is known for intelligence, and is easy to train for that reason alone. There are ways to train the Maine Coon, however, I believe that when the Maine Coon and the dog can come to terms on their own, they will build a loving bond together.

I cannot say for sure, however, if you train an animal by giving treats, do they not expect treats each time they do the good behavior? So giving a treat for getting along with a dog, could make a fat cat!

For this reason, I lean more towards the time factor. When you can spend time with the animals, holding and petting them both at the same time, they will begin to understand that the other animal is loved by you also. They will adapt. Who knows, you may come home from work one day and find the two snuggled together.

Of course there may be the offhand chance that your Maine Coon and a new dog do not get along. This is why it is advised to do slow introductions. If you had adopted either the Maine Coon or the new dog, there may have been some rough times in the past for either one of them.

The Maine Coon may have been attacked by a dog, this would spark a memory. Especially if the dog is the same breed as what you are considering adopting.

It may be the dog did not receive any attention at the previous home because of a cat. Anything is possible. You will want your two fur babies to get along. That is why you take the steps outlined and take them slow. You want both to be able to see that not only are they loved, but that you love the other one also.

All dogs will actually retain some instincts from their breed. If they were bred originally for hunting, this hunting instinct is still there, no matter how small. Your Maine Coon may have been dumped off and abandoned by the former owners when they moved or had a new baby.

This too, will cause some reactions that will need to be worked through with the Maine Coon. The dog, will have to learn that the cat is not a hunting animal. So call it training, if you want. They may both need some of that depending on their issues in the past. Granted you may not know what had happened previously, this is where patience is the key.

As in all things pets, please remember that the animal gives unconditional love and that you too, should return the love, unconditionally. That is quite probably the greatest fear an animal could have. The fear of not being loved. They have no way of telling us this important fact, other than following us, rubbing against us or in between our legs.

Truthfully, yes, this may be aggravating. Please stop and think before you begin to yell and tell the animal to go lay down, or to leave you alone. They do have feelings and you will cause them pain by using harsh tones with them, or by booting them out of the way.

Pets need to be seen by their doctors also. They need routine visits for shots and simple exams to be able to know when there is something to watch for, or if they are acting out of sorts. The veterinarian will know what to check for and be able to tell you if there is indeed a problem with either one of your fur babies.

When you have more than one animal in the home, when you have children, you want to be sure that there is no chance of either one getting sick from the other. Keep your pets shots up to date and also your child’s immunizations.

I apologize if any of you are against vaccines. I am speaking in general, for the health of humans and animals. Humans and animals both may end up with an unseen or undetectable issue health wise and by being seen by the vet, you will be able to have it taken care of before any issues become extreme.

In time, it may appear that there was never an issue between a dog and your Maine Coon. They will grow to love each other and play with each other. They will decide that they are friends and the home can be back to a comfy and cozy house filled with tons of love!