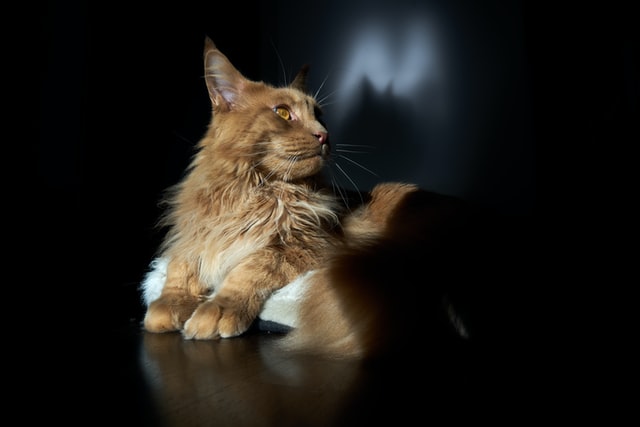 There are many interesting facts related to the Maine Coon cat breed, including the history of the breed’s origin. Maine Coon cats can survive even the harshest winters? Their double-layered coat and shaggy tail help them survive even minus temperatures. It is a specific quilt that does not allow the heat to escape outside.

Their undoubted charm is not even hidden because most of them are based on completely wrong assumptions. One more popular thesis says that the Maine coon in a straight line comes from a cross between a wild cat and a raccoon. The fluffy, brindle tail that characterizes both species supposedly proves the truth of such a claim.

However, any disputes over the possibility of such a connection should not arise, as zoologists claim that a cross between a cat and a raccoon is genetically impossible. Another theory says that the first parents of the Maine coon were a free-living female domestic cat and an American lynx.

Even though the connection between the cat and the lynx is quite probable, it remains to decipher the mystery of the origin of the magnificent, fluffy tail, which is undoubtedly the adornment of the Maine coon. The common feature, in this case, is the characteristic brushes on the tips of the ears.

Typically romantic in tone, there seems to be a legend that directly relates to the period of the French Revolution. According to this story, Marie Antoinette significantly contributed to the creation of the Maine Coon breed. The queen fearing for her own Angora during the revolutionary turmoil sent them to America for safekeeping. The cats brought from France are said to have become interested in local cats, contributing to the creation of a new breed.

The history of the Maine Coon begins in North America. There is much to suggest that these cats are a cross between domestic cats, which have become feral, and Angora. Until now, it is not known why Maine Coon cats have such specific fur. It may be a result of those mentioned above genetic crossbreeding. These features of the cat may be a result of adaptation to specific climatic conditions prevailing in America.

And how actually Maine Coon was created? The history of this breed does not have to owe anything to its creator because such did not exist at all. These cats developed by themselves, and the reason for this breed’s existence were conditions prevailing in the state of Maine. This state had a huge influence on the features of appearance and character, which were passed on from generation to generation.

This legend sounds really improbable. It claims that Main Coon is a cross between a large domestic cat and a raccoon. To support the veracity of this story had a large weight of the cat and a fluffy tail. Moreover, supporters of this theory also drew attention to the fact that the Main Coon loves water. Science clearly states that such a crossbreed is simply impossible in the world. Therefore, such a theory of the creation of this breed of cats remains only a legend.

Another story about the origin of the Maine Coon claims that it is a descendant of Norwegian forest cats. These animals supposedly came to the American continent on Viking ships. The dense coat, as well as the slanted eyes, are said to support the veracity of this theory. Each of these theories may have some truth, but, without a doubt, the first version regarding the origin of this cat breed is the most probable. They are most likely a cross between wild domestic cats and Angoras.

On the other hand, the next theory is a romantic tale that concerns the period of the French Revolution and is closely related to Queen Marie Antoinette. To escape imminent execution, she ordered her favourite cats and valuables to be taken to a ship but did not manage to get on board herself. She was captured and executed, but the ship and the cats sailed to the New World. Marie Antoinette’s cats were to be crossbred with local cats and thus give rise to the Maine Coon breed.

Until today the history of these unusual cats is not explained. Probably the breed was created from crossing different cats brought by Europeans to America. Over time, the cats living in these areas had to get used to the harsh conditions, and their phenotype changed. For the first time, Maine Coon was shown in a New York exhibition in 1860.

Considering their size and dignified appearance, it is not surprising that the interest in these unusual cats increased rapidly. In 1976 the Maine Coon was officially recognized as a separate breed in the USA. The Association of breeders and Lover of these cats was founded in the same year. International Felinological Federation FIFe (Federation Internationale Feline) recognized the breed in 1982.

About the Maine Coon breed

The Maine Coon has been recognized as the national breed of Canada. It is the largest representative of domestic cats. Its characteristic feature is the brush scratches on the ends of its ears, which add to its charm and apparent wildness. It owes its name to the American state of Maine, where it originated. “Coon” is part of the word “raccoon,” meaning raccoon.

To Europe Maine Coons brought Conie Condit (breeding Heidi Ho) and Pat Robinson breeding Gemütlichkatze). They were the first to show them at the exhibition in Germany, where Maine Coon aroused admiration and delighted breeders. Therefore, FIFe officially recognized the Maine Coon as a breed in 1982.

Nature of the Maine Coon

Maine coons are characterized by a very cheerful disposition. They are extremely friendly to men and become very attached to their owners – that is why they are compared to dogs in terms of character. They like to accompany man in his activities. Maine Coon is an ideal pet. Gentle, balanced, cheerful. It is very sociable.

These cats are very attached to a man. This bond can be extremely strong. Preferably, they would constantly stay in the company of a man “helping” with all housework. Establishing contacts is a real pleasure for Maine Coon. Always willing to play and mischief. He likes to be the centre of attention, especially when guests are at home. It is a great opportunity for him to show off and do what is normally forbidden. Maine Coon is a great friend for children.

With stoic calm will bear the most effusive symptoms of tenderness. He likes the company of other cats. It lives in friendship with dogs. He is strong and very agile. He likes to sit on the highest furniture. He is a great hunter. It is known for making characteristic sounds resembling chirping.

You should know about Maine Coon – before you decide on him

Maine Coon – is it a good choice?

This cat presents itself as extremely dignified, breeds virtually without genetic defects, and is calm and balanced. In terms of character and behaviour is similar to a dog. This means that not only traditional cat lovers will enjoy his company. The decision you have to make yourself, we suggest some tips make it easier.

Maine Coon cat – breeding – what to pay attention to?

Breeding in these cats should be focused on proper nutrition and instilling proper behaviour and should occupy a sufficiently large area.

Maine Coon cat loves people, which will certainly be perceived very positively. This breed manifests a lot of behaviour similar to barking quadrupeds. At the same time, this cat breed doesn’t impose itself, it can follow its owner, but if it meets any resistance – it will show patience. An additional advantage of the character is undoubtedly the fact that this breed of cats behaves perfectly in the company of children and animals.

History of the breed – what is worth knowing?

The history of the Maine Coon begins in North America. The history of this breed does not have to owe anything to its creator because such did not exist at all. These cats developed by themselves, and the reason for the existence of this breed were conditions prevailing in the state of Maine.

What should actually Maine Coon eat?

Feeding these cats should be based on high-quality food rich in vitamins, energy components, and macro and microelements.

What is worth knowing about the care of this cat

The grooming process consists largely of regular combing. Bathing cats of this breed is unnecessary, as their hair coat is waterproof. However, certainly, cats will not get mad if they end up in the bathtub. Maine Coon cats carry out their hygiene on their own.

However, during such independent washing, they often swallow longer hairs, which may contribute to the accumulation of hair in the digestive tract. To prevent such unpleasant consequences, it is worth giving cats special food.

Diseases are relatively rare. If they do happen, we can meet with :

The most important interesting facts about the breed

Maine Coon cats can survive even the harshest winters. Their double-layered coat and shaggy tail help them survive even minus temperatures. A legend about its origin says that it is a cross between a large domestic cat and a raccoon.