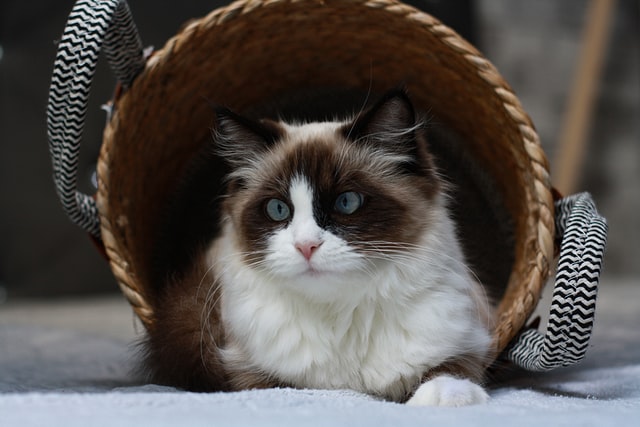 You want to get a family cat, you have narrowed down to two choices. Now let’s go through what the differences are between the two breeds. To begin, both of these breeds, The Maine Coon and Ragdoll are gorgeous felines. They are both considered part of the large breeds. There are many similarities between the two, but there are also some differences between them. Let’s try and decipher which is best for you and your family.

When it comes to which one is taller, the Maine Coon can grow to 16 inches in height, while the Ragdoll will only grow from 9 to 11 inches. However, Ragdolls can be just as big in length as the Maine Coon. Both breeds will grow to 35 or 40 inches.

When it comes to shape, both breeds, the Maine Coon and the Ragdoll, could be considered solidly built. They both have rectangular shaped bodies with a square type chest. The hind quarters do taper down for both. The legs on each are stocky and sturdy. The one difference is in the tails. The Maine coon tail is bushy and resembles a racoon’s tail. While the Ragdoll has a tail that is long and slightly tapered.

The Ragdoll is a longhaired cat. The hair is silky and super soft. Their coat would be considered the plush-type by breeders. They have very little, if any, undercoat hair. The Maine Coon has a coat that is medium to long. They have a nice thick undercoat for cold weather, and in the Springtime, it will become a thin coat. Meaning that they adapt to the weather.

The Maine Coon’s fur is also water resistant. This means that snow or rain will not stop them on their path to where they want to get to. The Ragdoll has top ‘guard hairs’ that are somewhat resistant to water. Theirs is nowhere near as effective as the Maine Coon.

Around their necks you will find some amazingly thick tufts or professionally called, ‘ruffs’. These do somewhat resemble the manes on a lion. However, the Ragdoll has a shorter neck than the Maine Coon. This ruff of hair would be the equivalent of a human wearing a scarf around their necks in the winter.

Both of these breeds could have a variety of colors to them. The Ragdoll has what are called pointed colors. This means ears and tail, as well as the face taper to a point of color.

The Ragdoll, the purebred Ragdoll, has some gorgeous bright blue eyes. While the Maine Coon has eyes that could have shades of green, gold or copper. The Maine Coon has rounder eyes and the Ragdoll is blessed with an oval shaped set of eyes. However, both have large, beautiful eyes.

Both the Ragdoll and the Maine Coon are sociable creatures. The love to be part of their human’s life. They should both be socialized starting when they are young. This helps them to accept other animals and all people. Seniors, all the way to young children are awesome humans for both breeds. Granted, supervision is required for younger children.

The two breeds thrive on being with their humans.  Interactions are essential for these creatures to be happy. These are definitely not the cat that hides away all day and is up all night screaming.

Both the Maine Coon and the Ragdoll love to be loved and give love.

They do expect love in return. Whether it is light petting, holding them on your lap, snuggling with them and talking with them. They crave human interaction. If the truth is told, these two breeds would do very well with a human that can spend tons of time with them. For them, being alone is harmful to their health.

These can both be considered the gentle giants of the animal kingdom. They act shy at first, but open up rapidly. The Ragdoll will take longer to warm up to strangers. The Maine Coon has very little problem coming out and greeting people. Factually speaking, the Maine Coon would be delighted to be the life of the party and the center of attention which can make them jealous.

Bothe the breeds love to play and be playful. If it is just toys that can be stimulating to their mind and make them active they are happy. But, they prefer interaction and playing with their humans. One activity that will bring out the best in them is a laser light moving. This brings out the predator in them and they act as though they are hunting prey. The same result can be had by one of these chasing strings.

When it comes time to cuddle, you will find that the Ragdoll would be thrilled to sit on your lap for hours, or for as long as their nap lasts. The Maine Coon is happier laying next to you, as long as he or she can feel you this makes them comfortable. There is no chance that anyone will mistake the Maine Coon as a lap cat. That action will seldom happen.

They are both quite happy to live indoors with you. The Maine Coon cat is capable of being outside for short periods of time. However, I do think it would be foolish to let a gorgeous cat such as the Maine Coon be outdoors and end up as prey for other predators.

If you have a dog kennel with a roof of some sort, this may help the Maine Coon wear off some energy and keep them safe at the same time. Either cat could be trained to walk with a leash, however, it is still in their best interests to keep them as indoor cats.

Do not mistake this, these two breeds are extremely smart animals. They will both learn to come when their name is called, they have their own ways to let you know what it is they want or need. If they hear the cat food can or bag, they will likely come running. As for making noise, you will not hear much sound of any sort out of your Ragdoll. The Maine Coon is a quiet cat also, however, this cat loves to talk.

Normal talking for a Maine Coon is not meows, oh no! They have a ‘trill’ sound that they make. A type of a purr combined with talking.  The Maine Coon will also growl, yowl or yell, and can also at times be heard chirping.

Both of these breeds will cost you some money if you want a purebred. It is not a cheap profession for breeders. They have to ensure that both cats they breed are pure. They make sure that they are registered. This can make the breeds expensive.

The first vaccinations, shots, deworming medicine, all of the medical care is taken care of before you can take your cat home. Some breeders may also provide a family tree of sorts. For as far back as they can go, they will fill this out so that you can see how pure the line is that your cat came from.

Some breeds are predisposed to certain diseases or ailments. Your veterinarian can explain the risks of these. While you are at the vet office, you can request a simple DNA test. This would show any disease or issues from the line.

A cat is not just a cat! If that is how one feels, they should not be a cat parent. Both these breeds should be treated like family. They should be fed quality foods, have fresh water available continuously, and they will want a bed. General medical concerns can be handled by the vet. You should be cleaning your cat’s ears to prevent ear mites, brush their coats routinely and make sure their mouths are healthy also.