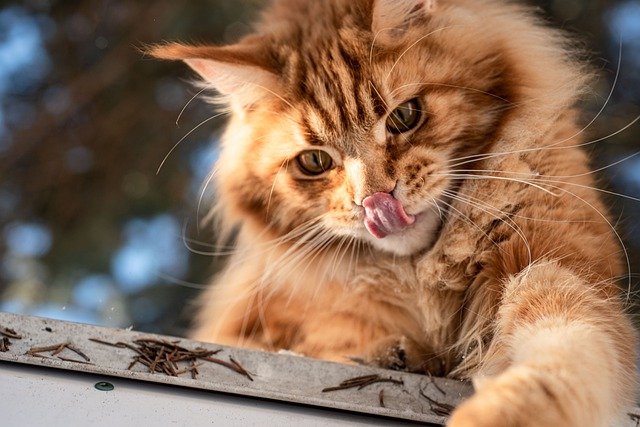 Contrary to popular rumors in history, the Maine Coon is not a descendant of the Bobcat. It would be genetically impossible for this to happen.

The colorings for the Bobcat range from tan to brown, they have spots or stripes that range from black to brown. They do have fur tufts around their ears, just as the Main Coon does, however, the underside fur is drastically different between the two.

The Maine Coon has a thicker fur, this is water resistant, making it easier for the Maine Coon to travel over snow and wet areas. Both the Bobcat and the Maine Coon have extra thick fur on their pads. This does help to protect their paws from injury due to rocks, ice or sticks.

The Maine Coon has a double layer of fur. The inner layer is silky and shorter, while the outer layer is longer. The Bobcat also has the stripes and /or spots to help camouflage themselves in the wild.

There is no comparison in personality between the Maine Coon and the Bobcat. The Maine Coon is a very loving and sociable animal. It loves to communicate and be with the owner. The Maine coon has no problems being around other cats, dogs and even children. This domesticated house cat is also known as the Gentle Giant.

He or she is extremely playful, highly intelligent and the male cats are known to be the clowns. They like to be funny when they are playing. Training is no issue when it comes to the Maine Coon. Their intelligence allows the cat to learn quickly.

The bobcat really has no personality. He is timid and prefers a solitary living arrangement. There is not vocal communication often between bobcats. Bobcats live alone or with their partner and babies. The babies are there for almost one year before they are ultimately kicked out of their mother’s territory.

The Maine Coon loves to talk. They do not actually MEOW, much. Their vocalizations are more of a trill and chipper type of chatter. The Maine Coon is one that can be found trying to carry on a conversation with their owner. This however, is not an annoyance due to the quiet volume of the Maine Coons voice. The Bobcat does not vocalize much either.

The bobcat will use visual signals, some vocalizations, and mostly scents and claw markings to communicate. Bobcats are extremely territorial, although they can adapt to any region, they do not choose to share their living space. This is why they use so many warnings via scents. They will urinate around their territory to warn off others.

Apart from being distantly related, there are not too many similarities between the two. They both can live in basically any region of the United States and Canada. They both hunt smaller prey. The Maine Coon is known as the hunter of domesticated felines.  There is no issue when it comes to the Maine Coon hunting mice, birds and squirrels.

The Bobcat also chooses to hunt the smaller prey. Although, his prey is slightly larger than a mouse or bird. They will go for squirrels, raccoons, possums and so on. The bobcat has also been known to take down some large prey once in a while. This, however, is not something they attempt often.

The bobcat will avoid human contact obviously. This could be very dangerous if a human does get too near to the bobcat. The bobcat will stay hidden if at all possible when there are humans near. The Maine Coon is quite different, this domesticated cat will chase down people to get attention. They have been known to buddy up to other animals just to have company if the owner is not home.

The Maine Coon is one of the largest of the domesticated cats. They seem larger than they are due to the fur on the bodies and the faces. The male Maine Coon can grow to become up to 18 pounds, the female up to 12 pounds. The length of a Maine Coon varies up to 38 inches, and the height of an average Maine Coon is approximately 16 inches from foot to shoulder.

The bobcat will almost double the size of an average housecat. However, the average bobcat is only slightly bigger than a Maine Coon Cat. A bobcat can grow to a length of 49 inches and a height of 24 inches. It is estimated that the average Bobcat will weigh roughly 40 pounds.

The Maine Coon does have a tendency for genetic health issues. Hip dysplasia and muscular atrophy are a couple of the issues. Modern day vets are able to help and treat these issues. The average life expectancy of a Maine Coon domesticated house cat is 13 to 14 years.

The bobcat will rarely live past 7 years. There have been recordings of a few living longer, but rarely will they make it past 10 years. The bobcat is susceptible to all diseases that can happen from parasites. The lifespan will obviously vary considering they live in the wild.

The bobcat has extremely sharp claws, however, when you see a paw print, you will not see the claws. The Bobcat’s claws are retractable. The bobcat will hunt for smaller prey the majority of the time. They can go long periods of time without hunting and eating prey. If there are not many smaller animals available, they will hunt larger animals.

Even though large, they will leave the carcass and return to get food as needed. The bobcat also has longer legs which enables them to run faster when hunting prey. They also have larger feet, this gives them a better balance when jumping and attacking prey. Bobcats, like other wild animals, are quite stealthy when it comes to hunting.

The Maine Coon will keep your house and yard free of any sign of mice or other rodents. They generally hunt rodents and birds, and will seldom attempt much larger than the birds. They too have claws. As with a normal house cat, the MaineCoons claws do need to be trimmed routinely. Once every 10 days to two weeks is the average for trimming.

The Maine Coon has shorter legs, it is not known as the athletic type of cat breed. It will have no issue running, but being lithe and agile may not be the top priority. Just like the bobcat, the Maine Coon has large feet. The Maine Coon does not utilize stealth mode, they would prefer to rush in to attack immediately when they are hunting.

The Maine Coon has a slightly oily coat. For the most part, they will be able to groom themselves. The oily coating helps prevent matting of the fur. They still wash themselves as a normal house cat does.

The Bobcat will also groom himself. They will use their tongue to lick every part that they can reach, then they will lick their paw and groom the remainder of areas they cannot reach with the tongue. This is similar to a house cat bathing themself.

Being domesticated, the habitat of a Maine Coon would be the house or garage. The Maine Coon becomes part of the family. You may find the Maine Coon curled up and sleeping with other household animals or next to children in the bed.

Bobcats on the other hand will always live in the wild. Unless of course they are captured and brought to a zoo or similar situation. The bobcat will have a territory of around 25 miles. They keep multiple dwelling dens. This is due to taking the young with when they need to hunt.

They also are wary of other scents and will travel to another of their dens for safety. Thankfully, due to their fur colorings, they can camouflage themselves in the outdoors.

A Maine Coon cat will shed their fur throughout the year at different times. You may be one of the lucky ones whose Maine Coon does not shed much at all. There may be a few times within a year that the Maine Coon will shed. However, with regular grooming, and extra done by you, shedding can be kept down to a minimum. The Maine Coon is fluffier than a bobcat when it comes to the fur.

Bobcats do not shed all the time. They will shed in the springtime. The only extra grooming they get is if you happen to be taking care of a Bobcat.  The bobcat grooms itself, and will likely have hairballs and other issues related to matted fur if they do not.