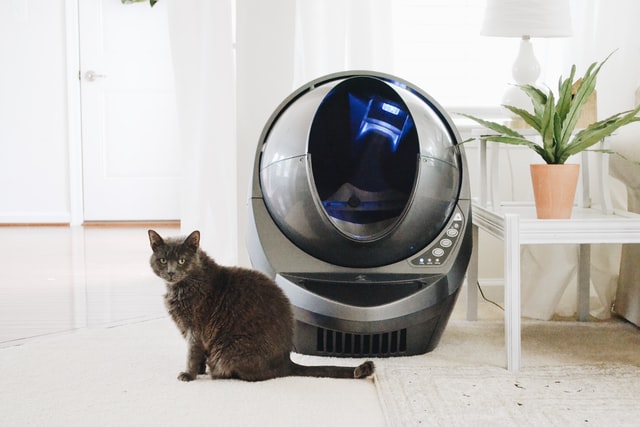 A common problem that cat owners report is excreting outside the litter box. Contrary to popular belief, the cause is never maliciousness on the part of the cat. If a cat, which has so far used the litter box without any problems, has been defecating outside of it for some time, it is most often connected with its health, uncomfortable conditions, or stress. Unfortunately, he won’t tell us about it himself.

We have to play detective. However, the stakes are high. Most people here will say: “Well, yes, I’m tired of cleaning all the time. It’s impossible to live like this”. I understand that this can be frustrating, but what you need to know at the beginning is that this is not a battle for your furniture and its cleanliness but for the health and well-being of your cat.

Because he is suffering, one way or another. Look at it from that perspective, and you’ll find it easier to come to terms with temporary material losses.

What could be why my cat is defecating outside the litter box?

If your pug poops in random places, there may be at least a few causes for this problem. Some of them we can quickly eliminate by ourselves, while others require the help of a specialist. Possible reasons for your cat to defecate outside the litter box are:

What should you do if your cat keeps pooping outside the litter box?

If there are no objective reasons why your cat is settling outside the litter box, you should consult your veterinarian. A specialist can help assess whether the problem is due to illness or stress. If your cat is defecating in random places, consider it an alarm signal and an attempt to communicate a need. Instead of getting angry and punishing your pet, it’s better to calmly assess the source of the problem.

Yelling or other reprimanding can only worsen the situation by increasing the cat’s stress level. By remaining calm, this behavior can be corrected quickly and effectively. The change will positively affect the comfort of your purr and everyone in the household. When looking for an answer to how to stop your cat from defecating outside of the litter box, it is worthwhile to show attention to tidiness, clean up excrement, and eliminate odors as soon as possible.

Wash rugs and floors. Dirty surfaces can be washed with an organic preparation that absorbs the odor and is finally rinsed again with water. If, after observing the cat, we do not find any obvious reasons for this inappropriate behavior, perhaps it was just a one-time situation, and there is no reason for concern.

Cats are spotless animals. So it’s not surprising that they avoid places whose smell repels them. One of them is the cat’s toilet. Remember – cats don’t want to eat or sleep where they poop. But there is more to it than that: your cat may not want to relieve itself where it feels it has done so before

The conclusion is simple – you need to take great care to keep the litter box clean. It’s not just about changing the litter but also washing the whole package, preferably with cat-safe cleaners. The smell in the litter box should simply be neutral. Any floral, woodland or marine scent absorbers may also irritate your purr and discourage him from using his toilet.

Also, remember that the type of litter you choose makes a big difference. Some absorb odor better, others less well. You can read more about this topic HERE. But it’s not only about the smell! It may surprise you, but some cats don’t like the texture of a specific type of litter. Sometimes, the cat’s paws pads are cut or simply very delicate.

Bentonite or crystal litter may irritate them. The cat then associates the litter box with pain and does not want to use it. Another issue is the amount of waste. A litter box with too little litter can be very uncomfortable for your cat. Ensure that your cat has a place to put his litter and that he stands on a clean, dry surface to do his business.

Very often, litter box aversion is dictated by health issues. If the cat has problems with the urinary system, spine, or joints, it may have a big problem with settling down. Just going into the litter box can already cause pain.

Then there are the behavioral issues – a cat that feels pain while in the litter box will probably learn to avoid it and choose a neutral place, such as your bed or carpet. If all other ways of changing your kitty’s toilet habits fail, be sure to see a vet!

We all know how sensitive cats are to change. They can also be very picky. Your cat does not want to use the litter box may be itself. How to do this is very simple. It can be too big or too small, for example. If it’s too tall, your cat may have trouble getting into it. Too small may reduce his physical or mental comfort and not give him enough clean space.

Or maybe you change the litter box or its placement too often? Even if you’re a fan of redecorating, you shouldn’t include changing the location of your cat’s litter box when doing so. Doing so can stress or confuse your cat, who will start to settle outside of it.

The last reason a cat doesn’t want to use the litter box may be because the environment doesn’t suit him. When a cat is stressed, he will often go outside the litter box. This is either to communicate a problem or out of fear. It’s essential to locate the source of the stress and eliminate it as quickly as possible.

Furthermore, you need to ensure that your cat’s litter box is in a place that he can consider safe. This will encourage him to return. A good location for the litter box is one that the cat can access continuously, around the clock. Also, the cat toilet must stand in a quiet and secluded place. It is also essential that it is located away from the bed and bowls.

But, but – there is another consideration. If your cat (or the other cats, if you have more than one) frequently defecates outside the litter box, a distinctive, unpleasant odor may remain in the house. Its presence also prompts the cat to break away from the litter box! A straightforward mechanism is at work here – the cat feels that outside the litter box, “something was done” and is inclined to repeat it.

Since there is a smell, there is also a signal to act. That’s why it’s so important to clean the surfaces on which the cat has settled properly so that nothing encourages it to repeat this activity in the wrong place.

How do I teach my cat to potty outside the litter box? List of ways

It’s helpful to know some of the possible causes of this behavior and how to deal with it.