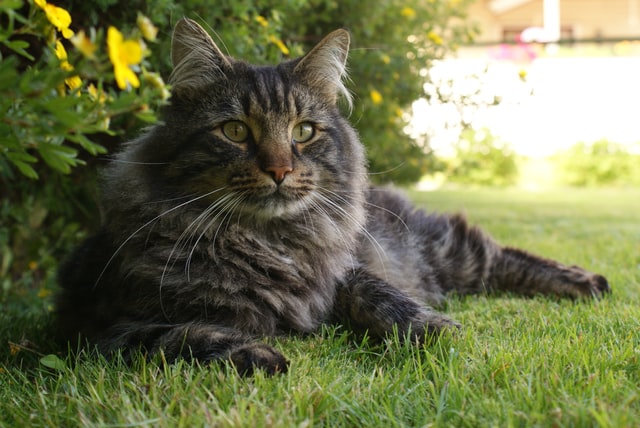 Diabetes mellitus is a sort of chronic and potentially debilitating condition in cats. This disease is highly rampant among obese cats, male cats over 8 years old, and those on a diet that contains high amounts of carbohydrates. Maine Coon cats are among those cat breeds that are suffering from diabetes in high quantities.

Feline diabetes is increasing every day. As the condition is supposed to be severe, it is highly crucial to take preventive measures and manage the health of your Maine Coon cat beforehand.

Due to their large size, Maine Coons are more at risk than other breeds of cats. What’s more, Maine Coons are prone to inheriting the disease genetically as well. If you are the owner of a Maine Coon, then you must monitor your cat’s weight frequently with caution.

As the report released by Banfield Pet Hospital shows, the quantity of diabetic cats has increased by over 18 per cent between 2006 and 2015. Although obesity is believed to be the biggest cause of feline diabetes, it is not the only factor. Even if your Maine Coon is not fat, it is best to watch for the signs and symptoms of its diabetes, so you can take it through treatment before the disease can endanger the pet’s life.

In this article, we are going to discuss the signs and symptoms of diabetes in Maine Coons. Later, the main causes of this disease are also mentioned if you read on.

What is Diabetes in Maine Coon?

Diabetes in the Maine Coon cats is very much similar to diabetes in humans. It is highly likely that your cat is suffering from the “type 2” diabetes disease.

Although feline diabetes mellitus is getting more and more widespread, the good news is that it can be treated and managed successfully. The main cause of diabetes in Maine Coon cats is almost the same as that of humans, which is insulin resistance.

Insulin is responsible for cells that absorb glucose. Glucose performs similarly to the main fuel of the body. When insulin cannot manage its duties well, cells cannot soak up sugar. As a result, sugar accumulates and remains in the bloodstream. Once the level of sugar soars and becomes critical, the cat’s kidney will no longer be able to work efficiently and sugar appears in the pet’s urine.

Your vet primarily needs to run a mixture of urine and blood tests to diagnose the Maine Coon diabetes. However, there are some signs and symptoms you can detect quickly to find out if your pet is suffering from diabetes.

The bad news is that cats are experts at hiding their pain or discomfort, making it a little hard to spot the symptoms of diabetes. Despite that, there are some signs you should be careful about:

Urinating unusually might be a sign of both type 1 and type 2 diabetes in Maine Coons. That is the normal reaction of the pet’s body when tolerating excessive glucose. In other words, the pet’s kidney is trying to get rid of the extra glucose from the body by urinating more frequently.

As the concentration of glucose rises in the bloodstream, the cat’s body attempts to pull more water into the urine. The increase in urination will lead to an increase in the loss of body water, possible dehydration, and increased thirst.

One approach you can follow to watch how much your cat urinates is to keep an eye on it for a couple of days and measure the amount of urine it passes in its litter tray. If you have several cats, be careful not to use the same tray for them. Also, it is good to know that if your pet tends to spend a lot of time outdoors, it will be a little hard to monitor the amount of its urination.

When a Maine Coon suffers from diabetes, its body cells are no longer able to absorb the glucose properly from the bloodstream. As a result, the cells are forced into consuming fats and proteins in the body as the only remaining source of energy.

After the reduction of fat and protein in the Maine Coon’s body, it has to eat excessively to regain the weight it has lost. Therefore, the pet’s appetite soars noticeably while it drastically loses weight.

Keep in mind that long fur may conceal the weight loss of your Maine Coon and make it appear even bigger than before. Therefore, you need to find out how fat your pet is. To do so, you can stroke the rib cage of your cat. If you feel its ribs more easily than before, then it is probably underweight. Otherwise, if you need to exert pressure to feel the rib cage, the cat is likely to be overweight.

Although the aforementioned symptoms are in fact the most essential signs of diabetes in the Maine Coon cats, there might be additional signs as well. If you see the following signs in addition to the previous ones, then your cat is in critical condition, certainly in need of intensive, quick care.

Inability to Jump and Lack of Interest

If your cat is gradually getting more and more sluggish, then you should be cautious about it. Though a hardly-noticeable sign, loss of interest and activity in a Maine Coon cat might be a sign of diabetes.

If your cat is no longer as playful as before and does not like jumping on the furniture and running around everything, then it might be sick and this can be a primary sign of diabetes.

Diabetes in cats makes them drastically weaker. One of the upshots is seen when the pet walks flat on the back of its hind legs. Once the blood sugar level of the Maine Coon increases, neuropathy influences the hind legs of the pet. This is a serious sign and needs urgent response as it may lead to permanent paralysis if left untreated for a long time.

Lack of Appetite, Vomiting, and Lethargy

These are considered to be the latest symptoms of diabetes in Maine Coon cats. Though too integral to neglect, these signs are alerting enough to make you aware of your pet’s life in jeopardy. Hyperglycemia, hypoglycemia, and gastroparesis in cats can lead to nausea, eventually resulting in vomiting, lack of appetite, and lethargy.

Genetic factors in humans account for only 10 per cent of the total risks causing diabetes. As a result, it is worth it to focus on environmental factors leading to diabetes and try to eliminate them. The good news is that feline and human type 2 diabetes are greatly similar.

There are multiple factors causing diabetes in Maine Coons. While there is not one major factor directly causing diabetes, there are many ones that can predispose a cat to develop the disease.

The biggest factor that we can probably have under control is the cat’s weight. The hormones in an overweight cat do not perform their job properly, leading to an improper response to the insulin.

This will eventually lead to the reduction of insulin secretion, escalating the level of glucose in the cat’s body. It is also good to know that a low carbohydrate diet can be obtained by using canned foods instead of kibble.

Some diseases can predispose a Maine Coon to diabetes if left untreated. For example:

Middle age or older Maine Coons are more than other ones prone to develop diabetes. Therefore, as your pet gets older and older, it needs more attention to prevent it from getting sick and diabetes.

In exact terms, most Maine Coons over 8 years old are at higher risk, with the peak of danger happening for those between 10 and 13 years old.